When Our Ship Comes Home

Shanties, the worksongs of square-rig sailors, have been for me a passport to friendship with singers, sailors and scholars around the world. My interest in maritime traditions, kindled by Doerflinger’s Songs of the Sailor and Lumberman. (New York: Macmillan, 1972, originally published as Shantymen and Shantyboys. New York: Macmillan, 1951), recordings of Louis Killen, John Roberts & Tony Barrand, Gordon Bok and others and nurtured during my years at Mystic Seaport, has carried me far from my native Minnesota to France, the Netherlands, Poland and my current home, Great Britain. Thanks to Stuart Frank and Sandy Oliver for first giving me the chance to sing these songs aboard the vessels at Mystic Seaport Museum, the only place in this day and age you can (almost) earn a living singing shanties.

Many of the songs on this recording have been culled from the collections at the Archive of Folk Culture at the Library of Congress in Washington, D.C., USA. The Archive is a treasure-trove of tradition, always of service to singers and scholars and always in need of financial support. If you value the preservation and study of musical traditions, why not send a contribution to the Parsons fund (established in 1994 by Gerald E. Parsons Jr., a long-time Center reference librarian who helped me among thousands of others) at the American Folklife Center, Library of Congress, Washington DC 20540-4610, USA..

Songs from the Archive of Folk Culture

James Madison Carpenter was an American scholar who wrote his doctoral thesis on sailors’ music (‘Forecastle Songs and Shanties,’ Ph.D. thesis, Harvard University, 1929.) Both in preparation for his degree and subsequent to it he travelled Great Britain meeting and recording old sailors. His recordings and papers are now held at the Archive of Folk Culture. In 1928, Carpenter visited Cardiff where Richard Warner sang the powerful Down Trinidad. Carpenter’s notes say that it was ‘sung in Barbados, Negroes in sugarlog station on S.S. Bananzo.’ ‘Burton’ is a term used for a block and tackle used in hoisting, particularly among longshoremen.

In Barry Docks, near Cardiff, Carpenter met William Fender who recorded his unusual version of Fire Down Below and the comic Here We Come Home in a Leaky Ship. Also in Barry Docks, Rees Baldwyn sang the curious You’re Nothin’ but a Humbug. In his notes Carpenter wrote, ‘Mr. Baldwyn learned this from the Negro singers in Savannah and New Orleans…. It is sung with much emphasis and force.’ For more information about these songs and other shanties in the Carpenter collection, see “‘Here We Come Home in a Leaky Ship!’: The Shanty Collection of James Madison Carpenter” Folk Music Journal 7/4 (1998): 471-495.

My singing of Drinkin’ The Wine is a conflation of several versions including one sung by black longshoremen of the Ball Steamship line, recorded in Tampa, Florida by John Becker and Alan Lomax in 1944; a menhaden fishing version sung by Shedrick Cain in Weems, Virginia in April, 1957 and recorded by James Wharton; and one sung by the Bright Lights Quartet, a gospel group made up of menhaden fishermen: Robert Beane, James Campbell, Lawrence Hodge, Shedrick Cain and Dorsey Norris  and recorded by Robert Witte in 1967 (Note: Norris was not formally part of the quartet but sang along that day according to Robert Witte who spoke to Catherine Hiebert Kerst at the Archive of Folk Culture who passed the information along to me via e-mail Sept 2010); as well as the version printed in Lydia Parrish’s Slave Songs of the Georgia Sea Islands (n.p.: Creative Age Press, 1942; reprinted with a new Foreword by Art Rosenbaum, Athens, Georgia and London: The University of Georgia Press, 1992).

Here are two songs from the rivers of America. Farewell, Dear Friends was collected from the singing of Sam Hazel who sang roustabout and Mississippi River songs for Herbert Halpert in 1939. Uncle Bud is taken from Mary Wheeler’s fine Steamboatin’ Days: Folk Songs of the River Packet Era (Baton Rouge: Louisiana State University Press,1944.) the only print collection to include a number of riverboatmen’s worksongs.

Down the River of Gambia was sung by Captain Leighton Robinson whose songs and stories were recorded in California by Sam Eskin in January, 1951. Captain Robinson learned the song from black sailors who sailed with him in ‘checkerboard crews’ (one watch black, the other white).

Two songs come from a typescript collection made by Joseph McGinnis in New York in the 1920s. This may be the same McGinnis cited by Johanna Colcord as her source for The Jamestown Homeward Bound and four other songs (Colcord, Johanna, Songs of American Sailormen. New York: W.W. Norton, 1938. Enlarged and revised version of Roll and Go: Songs of American Sailormen. Indianapolis: Bobbs-Merril, 1924; p. 132-4). I’ve not seen The Deepwaterman elsewhere, perhaps it is McGinnis’ composition? When Our Ship Comes Home had no melody in the typescript so I supplied one. The reel in the break is La Belle Chasse which I learned from the incredible accordéoniste Québécois, Stéphane Landry. Julie Young complements the tune with French-Canadian step dancing.

Gale Huntington, well known in shanty circles for his Songs the Whalemen Sang (Barre, Massachusetts: Barre Press, 1964) discovered a wonderful manuscript created by a ship’s fiddler, William Litten, who sailed on at least two different vessels in the British East India fleet from 1800 to 1802. Gale transcribed the tunes and published them (William Litten’s Fiddle Tunes, 1800-1802. Vineyard Haven, Massachusetts: Hines Point Publishers, 1977). I play two sets of tunes from this collection, The Gooses Minuet / The Nyph, which is graced by Jackie Rawlinson’s wooden-shoe clogging, and Litten Hornpipe / Hun Hayden. Of these, I assume the one carrying Litten’s name is his own composition. I wonder, just what is a ‘ nyph’?

Dick Swain, singer, squeezer and librarian, found Phil and June Colclough’s Blood on the Sails in a collection of poetry from the British Isles and gave it this haunting tune.

The spirited Hé Ho, Down Below was written by Marian Woestenburg and Ger Lamerus of the group Drijfhout [Driftwood] from the island of Vlieland in the Netherlands. The group specialises in maritime traditions and you can hear them on their 1997 CD, Gestrand op Vlieland (Syncoop records, 5757 CD 216, available from Windrose Music, postbus 414, 9200AK Drachten, The Netherlands, http://www.xs4all.nl/~windrose/).

Round a campfire after a fine day of music at the Penetanguishene ‘Songs of Sail’ festival on the shores of Lake Huron, I heard John Archbold of Toronto, Canada sing The Old Red Duster (© 1990, John Archbold, used by permission) which he wrote based primarily on his father’s stories of service in the English merchant service. The ‘red duster’ refers to the red ensign flown by vessels in the British merchant service.

Singing and research cannot be done alone. As I’ve explored traditions of maritime song over the years, I’ve benefited from the help of many friends, singers and scholars. Thanks to Michel Colleu, Forebitter, Stuart Frank, Joe Hickerson, Nanne Kalma, Marek Siurawski, Wally Macnow and Andy Wallace; to Martin the unflappable, John Archbold, Ger Lamerus, Dick Swain, Marian Woestenberg, and Ted Young; and also to Jenny Bellamy, Jennifer Cutting, Glenn Gordonier, Judith Gray and Joyce McLeod. Enormous thanks to all the singers and dancers for their contributions to this disc! Thanks to Anni and Dave, Jay and Bob, and, of course, Julie, Lauri and Smack – I couldn’t have done it without you! 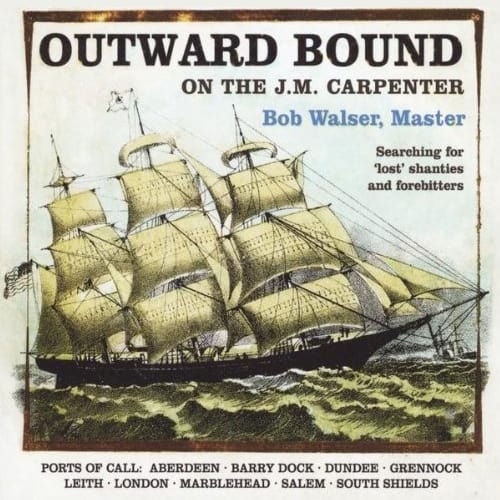 Outward Bound on the J.M Carpenter