Ivar was a colorful figure from the Pacific Northwest who may have collected or written this song. Some of his songs may be found in An Ivar Book of Ballads from Puget Sound by Ivar Haglund and George Frederick McKay. [Note: New information (to me) on this song is appended in a note below]

Jon Pfaff of Seattle sent the following additional information on the song via e-mail. Thanks, Jon!

The song was written by Ed Adams, an English teacher.  Here is a transcript of Ivar, Emmett Watson and Guy Williams talking about it on one of Ivar’s radio shows.

Ivar: Do you remember Ed Adams?  Who had a program called ‘Reading for Fun’?

Ivar: Ya.  Who was an English teacher.  God he . . .he . . . .he did interesting things about ah – I learned a song from him.  He said ‘I’ll write you a song.’  And he said it’s called ‘A Sloppy Old Sloop.’  And he would read his poetry and his other things about – review books.  In a very delightful way.  But I remember this thing . . . “With a barnacle under the binnacle (sp?), and a bottle of pop on the poop.  And the odor of crab-n pervading the cabin, we’ll sail on our sloppy old sloop.”

Lyrics from the recording: 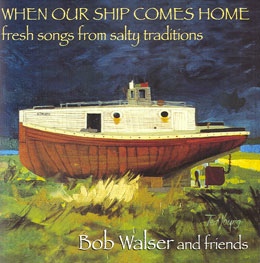 More Lyrics from When Our Ship Comes Home