Outward Bound on the J.M Carpenter

Strangely, these songs were discovered at a desk in an office in Minnesota. Working with the James Madison Carpenter collection I’ve spent hours transcribing these and other songs from Carpenter’s recordings (originally done on cylinders) and manuscripts. From that unlikely situation come these gems of the sailors’ repertoire.

Born in Booneville, Mississippi, James Madison Carpenter studied sea shanties for his PhD thesis at Harvard. He then received a fellowship to continue his research in the British Isles, which he did from 1929 to 1935, amassing an enormous collection of shanties, sailors’ songs and other folklore. Carpenter never found a publisher for his collection but now a team of scholars under the direction of Dr. Julia Bishop is editing the collection for eventual publication. The collection is held by the American Folklife Center at the Library of Congress who have been enormously helpful with the project.
I’ve heard it said that the real benefit of transcription is to the transcriber. Close listening to recordings of old shanty singers has been a trial for my family (just imagine!) but wonderfully instructive for me. Though Carpenter noted few details about his singers, his recordings convey how these men sang shanties and, as many were seamen, how at least some shanties were sung in the days of commercial sail. Carpenter often recorded only a verse or two of a song, but in those instances where he recorded a whole song (e.g. “Tiger Bay” and “Hoist Her up from Down Below”), I have tried to reflect some of the wonderful rhythmic and melodic variation that the original singers employed.

I wish I could tell you more about the men who sang these songs but Carpenter left only brief notes about these singers. Research continues on the Carpenter edition including efforts to learn what we can of the contributors. Any help locating information about these men or their descendants will be most welcome!

A word about shanty style. Shanties live on. Though their original function in deepwater sail has vanished, the songs continue in festivals, recordings, clubs and informal gatherings. For this project I have tried to steer a course close to the roots of the tradition, but with an ear to the present as well: I have modified lyrics, there is more harmony than was common at sea, and thanks to Dave Hull, the fidelity is much better than Carpenter’s Dictaphone cylinders. I hope you enjoy these songs as much as I do.

Dedicated to the memory of Johnny Collins.

George Simpson, Dundee, Scotland · Simpson learned this song from “an old St Johnsman, 1891, Barque Penobscot, Captain McCalder Buffort”. He called it a foresheet and mainsheet shanty. Carpenter only recorded two verses but the song is too much fun to stop so soon so I augmented it a bit.

J.S. Scott, London · What a glorious melody! To Scott’s brief singing I added verses from Stan Hugill’s Shanties from the Seven Seas.

John Harris, South Wales and Paddy Gaul, Waterford, Ireland · How this song with its Maritime Canada references came to be sung by sailors in Wales and Ireland is a mystery. The only analogue I have found is in Kenneth Peacock’s Songs of the Newfoundland Outports Vol. 3.

Rees Baldwin, Barry Dock, Wales · I’ve recorded some of Baldwin’s wonderful repertoire before as did Mick Tems (on the album Trade Winds by the group Calennig). Here’s another gem from this terrific singer (with a vibrato as wide as the Bristol Channel!).

Walter Ede, Edinburgh, Scotland · I love Ede’s crisp and precise singing and his delightful melody, quite different from that commonly found.

Charles Snellen, Marblehead, Massachusetts · Captain Snellen knew something about fishing: he spent 30 years on the Grand Banks. Carpenter attributes this song to fishermen of Marblehead or Gloucester, Massachusetts.

7 · Down in those Valleys

Rees Baldwin, Barry Dock, Wales · Baldwin only sang four verses for Carpenter so I’ve supplemented his with a few of my own.

Edward B. Trumbull, Salem, Massachusetts · No recording survives of this amusing song in music-hall style. All we have from Carpenter’s early research is the song text and notation for one verse. According to Carpenter’s notes, Trumbull learned the song in 1868 and 1874.

James Wright, Leith, Scotland · “Tally I O” is one of the titles mentioned in Richard Henry Dana’s classic maritime memoir Two Years Before the Mast (1840) without any text or tune. Could this song be related? Stan Hugill includes a song entitled “Tiddy Hi Ho” from Tobago Smith in Shanties from the Seven Seas and Cecil Sharp’s English Folk Chanteys includes another sung by Mr. Rapsey at Bridgewater. From each of these I borrowed verses to fill out the song. Carpenter’s notes read “Heard in Accrington, a Liverpool ship in Calcutta, 45-50 years ago [1875-1880]… Later used for a shanty.”

J.S. Scott, London · Carpenter notes that Scott sailed from 1863 to 1903 and that this halyard shanty was made aboard the Gilroy in 1887.

John Ferries (Gerries), South Shields, England · Like many of Carpenter’s singers, of John Ferries (Gerries) only a name and locality survive, but what a wonderful telling of the familiar tale of Jack ashore. Tiger Bay was a notorious London neighborhood hard by the docks and not far from the sailor’s home or bethel in Well Street (now Ensign Street) near Wellclose Square.

William Fender, Barry Dock, Wales · William Fender sang many unusual shanties for Carpenter. He went to sea in 1878 and left sail in 1900. Excepting the songs he sang, all traces of this man have vanished. Fender learned this song from a West Indies stevedore in 1888.

Jimmie Cronin, London · This melody is often associated with songs about Ratcliff Highway (e.g. Palmer’s The Oxford Book of Sea Songs) but Cronin’s text evokes the more sentimental flavor of the broadside The Country I’m Leaving Behind, from which I pinched a few verses. 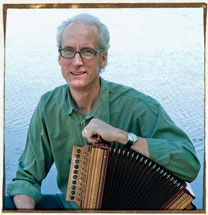 When Our Ship Comes Home